Waiting For An Assignment 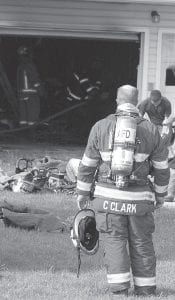 A firefighter looks on as others work inside the garage at the Brad Kessler residence, 25240 Co. Rd. M. Tom Franks, Gorham-Fayette Fire Department chief, said an electrical short in a vehicle parked in the garage caused the Sunday, Aug. 15 fire, which was contained to the garage and a back room. One vehicle was a total loss; a second was damaged, as was a motorcycle. Franks estimated damages between $50,000 and $70,000.–photo by David Pugh