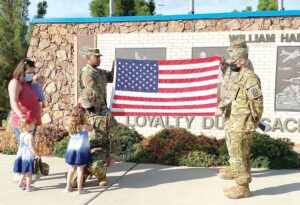 Collin Wagner, PHS ‘06, was promoted Monday, Aug. 2, from Warrant Officer 1 (WO1) to Chief Warrant Officer 2 (CW2), at Ft. Bliss, Texas. Wagner kneels as his oldest daughter, Abby, 4, takes off his old rank and pins on his new rank. Ellie, 2, his youngest daughter, at left, holds his new hat with the new rank. At far left is his wife Christie holding Noah, 11 months. The couple also has two other sons, Sam, 8, and Ben, 6. Wagner joined the Army in February 2009, and is a veteran of Afghanistan. He is the son of Tom Wagner, Pettisville, and Karen Wagner, Pettisville. – courtesy photo