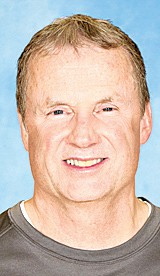 Tom Wagner, Pettisville cross country coach, was named District Coach of the Year in girls cross country for the 2017 season by the Ohio Assoc iat ion of Track and Cross Country Coaches.

One coach is chosen from each Ohio district regardless of school division.

Wagner coached the Birds to a sixth-place finish at the Division III state meet last fall.

The Pettisville girls team finished as runners-up at the district and regional meets, and were Buckeye Border Conference champions.

The girls team has qualified for the state meet each of the past three seasons.

Elizabeth Sauder finished seventh at the state meet, and Nichole Foor finished 23rd. The top 25 runners in the state qualify for All- Ohio.

Both girls were recognized for the All-Ohio honor between the junior varsity and varsity boys basketball games on Friday, Feb. 2.

Wagner has coached cross country at Pettisville for 37 years, and continued to coach last year after retiring as a Pettisville elementary teacher.

Cross country at Pettisville has enjoyed a great deal of success over the years, with numerous runners and teams qualifying for the state meet.

Wagner has been a member of the OATCCC for 10 years. Coaches must belong to the organization to qualify for the Coach of the Year honors.

Wagner also was named District Coach of the Year in 2007 for the boys cross country team.­– D.J. Neuenschwander