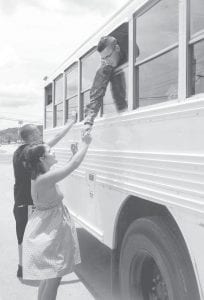 Christie Wagner says a final goodbye to her husband, Collin, before he is deployed to Afghanistan, Thursday, June 24. Wagner is a 2006 Pettisville High School graduate.–courtesy photo

His group left Fort Hood, Texas, on Thursday, June 24, and flew to Bangor, Maine. From Maine they flew to Romania, then to Manas Air Force Base in Kyrgyzstan, where they camped in tents “next to some breathtaking mountains,” said Wagner.

They completed their journey at Bagram Air Force Base in Afghanistan, where Wagner’s group will be deployed for approximately 12 months. He could be redeployed at some point to Kandahar, in the southern part of Afghanistan.

The son of Tom Wagner, Pettisville, and Karen Wagner, rural Delta, Collin attended Bluffton College for two years. He joined the army in February 2009, and completed basic training at Fort Leonardwood, Mo., graduating on May 14, 2009.

His wife, Christie (Hinkle), has moved back with her family in Sandusky during Collin’s deployment.