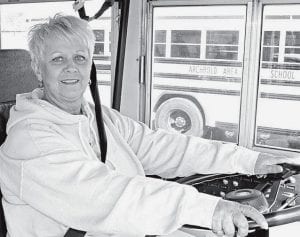 Karen Vonier at the controls of an Archbold Area School District bus. After more than 30 years in the driver seat, she decided to retire. She said she will miss her young passengers.- photo by Rita Bilen

Retiring after 32 years of driving a bus for Archbold schools, Karen Vonier has many stories to share.

Vonier started driving bus at the suggestion of her father, who also drove bus for many years.

Working as bus drivers “kind of ran in the family,” since her sister and brother drove bus as well, she said.

Changes, Then and Now

When Vonier began driving bus, a chauffeur license was all that was needed. Now it’s more complicated.

Drivers must go to school for a week, drive a bus for eight hours, and take a test to get their Commercial Driver’s Licenses (CDL).

They also have to be fingerprinted, get a background check, and do a maneuverability test.

Driving a bus is not an easy task, but you learn by “driving and experience,” she said.

Was she initially intimidated? “Oh, absolutely!” she said.

The Good and The Bad

The easiest part of Vonier’s job is greeting the kids in the morning and telling them goodbye after school. She said one of the best parts of the job is, “just seeing their smiling faces. What really makes it fun is when you get notes and pictures from kids.”

On the downside, bus drivers are responsible for children even when they get sick. One Halloween the kids boarded the bus in their costumes. A little boy was dressed as a football player and approached Vonier to say he didn’t feel well. “He got sick in his helmet. I lucked out that day,” she said.

The toughest part of the job is driving in fog. “You have to be very cautious because you can’t see. I understand our cargo is precious and priceless,” said Vonier.

Has she ever had a difficult day? “I’ve never really had a hard day, honestly. I don’t know what a hard day would be,” she said.

Kids have changed over the years. Vonier said.

“They are busier than what they used to be because they are involved in so much stuff now. Years ago the little kids didn’t have things like soccer, football, or baseball.”

Vonier has also watched out for kids by reminding them if they have forgotten a band instrument. If a child has forgotten his drink for a field trip, she will often go and get one for them.

When children forget their lunch money, she will give them some, saying, “Don’t call your mom. Here’s some lunch money.”

Her passengers have provided Vonier with plenty of memorable moments. One Christmas, a boy shared that his mom got a really nice present from her boss: “He fired her!”

Vonier has provided herself with some unforgettable moments as well. “One morning the secretary called me at 8:40 am and I was still in bed. I overslept!” she said.

On another morning, “when I got to my second stop, the mother came out and said ‘Well, isn’t there a fog delay?’ I said, ‘Really? OK, goodbye!’ and I went home.”

Although she is looking forward to having some days off, Vonier is going to really miss her kids.

Sometimes children have written her notes saying, “You’ve been such a good bus driver. You’re the best.” Those kinds of things make her job fun and rewarding.

Looking back she said, “I think I’ve learned to be a little more patient and lenient. I have truly enjoyed driving bus. It’s been both a learning experience and a rewarding one. I will miss my children.”