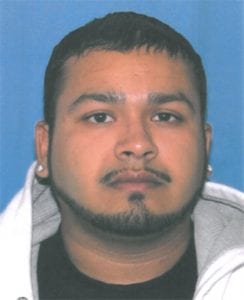 Gilberto Villarreal, Jr., 27, Archbold, who is charged with breaking into a Napoleon home armed with a shotgun, has been captured, and the woman he may have kidnapped is safe.

An official with the Paulding County Sheriff Department who asked not to be identified said the car Villarreal was driving was pulled over by Paulding County deputies near the intersection of County Road 424 and US 127 about midnight, Monday night, Nov. 12.

He was taken into custody without incident on a Henry County warrant charging him with aggravated burglary.

Natalie Rose McCoy, 24, who has a Defiance address, was in the vehicle with him. She is the woman who may have been taken against her will.

Napoleon police said at about 12:07 pm, Monday, a man armed with a shotgun broke into a residence at 56 Sunnydale in Napoleon’s Valley Brook Estates mobile home park. He entered through a window.

Once inside, he allegedly assaulted a woman in the residence, identified as McCoy.

The homeowner attempted to intervene, and the two men struggled. During that struggle, a single shot was fired from the shotgun.

The intruder regained control of the weapon, and the homeowner escaped through the window.

A search of the mobile home was conducted. No one was found inside.

A Napoleon police press release states, “Through investigation, the unknown male has been identified as Gilberto Villarreal, Jr.”

Napoleon police announced they were looking for a gold 2001 Chevrolet.

A later Napoleon police press release states, “After following a number of leads and additional tips, the Chevy Impala being sought in connection with this case was found in Paulding County.

“Occupants of the car were Natalie McCoy and Gilberto Villarreal…

“Natalie is safe and is now with relatives. The investigation continues.

“No other charges have been filed at this time.

“No further information will be available at this time.”

Court records available through the Fulton County website and back issues of the Archbold Buckeye show that Villarreal has had previous problems with the law.

He was indicted in 2007 on charges of burglary and theft for allegedly breaking into an occupied structure in August of that year and stealing $5,000 in cash.

The burglary charge was dropped, and he entered a guilty plea to the theft charge in October 2008. He was sentenced to community control.

But in April 2009, he was found to be a community control violator, and was sentenced to six months in the Ohio Department of Rehabilitation and Corrections. He was delivered to the ODRC Orient, Ohio reception center on May 7, 2009.

He was indicted again in April 2011 on two counts of theft and a single count of misuse of credit cards.

He allegedly stole a credit card and property in February 2011.

He entered a guilty plea to the theft charge in June 2011, and was sentenced to 10 months at the ODRC. His sentence was to be served consecutively with a sentence imposed in Defiance County.

The ODRC offender search page does not list a Gilberto Villarreal as presently being incarcerated.

McCoy had an Archbold address in 2011.

In August of that year, she was arrested at a residence in Colony Meadows as she was removing her property.

A routine check revealed McCoy was wanted on a warrant from Defiance County.

The nature of the warrant was not specified.