Village Saves Money Doing Some Of Its Own Construction 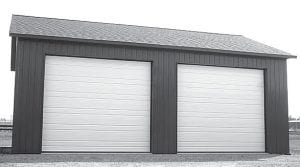 Archbold street department employees did most of the construction on a storage building on East Holland Street; however, professionals were hired for other jobs. It is estimated they saved village taxpayers $20,000.– photo by David Pugh

Everybody knows that DIY, or Do It Yourself, is a way to save money on a project, big or small.

That includes the Village of Archbold.

Last spring, the village street department was faced with a problem. The old storage building at the far end of East Holland Street had deteriorated to where it was no longer safe to go inside, said Jason Martz, village street commissioner.

“It was almost ready to fall over,” he said.

The village needed a building to keep valuable equipment under cover, such as the tar kettle, a trailer-mounted machine to heat and apply tar to cracks in pavement; an air compressor; a trailer for the village paint machine used to apply stripes to streets and sidewalks; and portable stop signs and other knickknacks.

“Stuff you don’t want outside,” he said.

Yet, there wasn’t money in the budget to build a new structure.

So, the street department turned to the DIY solution.

One thing DIYers learn quickly is some jobs are too specialized or require professional equipment. Martz said the street department didn’t have the necessary tools, and none of the crew had the skills to pour a 28×30-foot concrete slab foundation.

The job was hired out to a local contractor. When the contractor was finished, there was just a slab on the ground, with bolts sticking up to secure the first boards.

They purchased the materials from a local firm, who helped with the plan.

From there, the street department took over.

“All of us can do roofing, and two men have construction experience; they had built buildings.”

As they began the project, Martz said they followed the rule of keeping everything square, so that a 90-degree corner actually measures 90 degrees.

They worked on the project as their regular street projects allowed– a few hours here, a few hours there. He said the street department workers enjoyed the work as a change of pace.

“We have a great crew,” Martz said.

The building won’t be heated or insulated, which made construction easier. Electricity was run for lights.

Two overhead garage doors came under the heading of too specialized for the street department, so that job was hired out.

As an added bonus, Dennis Howell, village administrator, said by doing the work itself, the street department saved village taxpayers about $20,000.