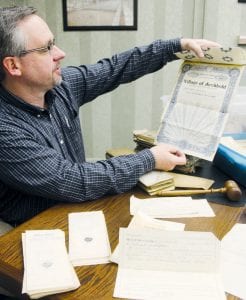 Jim Wyse, Archbold mayor, looks over a one of dozens of old documents found in a $500 “Defiance Street Improvement Bond” storeroom at the Archbold Municipal Building.– from 1911. The interest rate paid to investors photo by David Pugh at the time was 4.5%. The bond is just

A forgotten box, covered by other boxes in a storeroom at the Archbold Municipal Building, has yielded a glimpse into the past.

All packed away in a cardboard box in a corner.

Kidder told Wyse about it.

“I find it (history) intriguing. I’m kind of passionate about that stuff,” Wyse said.

Wyse took the box home and began going through the papers.

The box contained possibly 400 postal cards that were apparently filled out by the parents of a new baby, sent to the Bureau of Vital Statistics in Columbus, and then mailed back to Ora E. Lauber, the local registrar.

The cards contained the mother’s name (maiden and married), the name of the father, the child’s name, and date of birth– but no information such as birth weight or length. 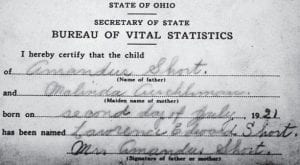 This card, one of about 400 found in a box of old records discovered in the Archbold Municipal Building, records the birth of a child. It states, “I hereby certify that the child of Amandus Short and Malinda Aeschliman (mother’s maiden name) born on second day of July, 1921, has been named Lawrence Edward Short.” It is signed, Mrs. Amandus Short. Lawrence Short, a former mayor of Archbold, is 90 years old.– photo by David Pugh

There were other documents dealing with the end of life. There were permits for burials, permits to move bodies for one place to another, and permits to exhume and move the deceased.

In most cases, the name of the person, their date of death, and cause of death were recorded with who was then called the undertaker.

One permit was for a “stillborn female.” No other information was listed.

In another case, Wyse said a burial permit for human body parts, found along the railroad tracks, was found. No name was listed.

Wyse said the earliest documents, dating back to 1896, were from the “mayor’s court.”

Mayor’s court was where punishment was dispensed for minor infractions of the law.

“Some of those mayor’s court records were kind of interesting,” he said.

“As I was reading through that stuff, it became apparent why, back in the day, mayors only made it through one term.

“They had to enforce the rules and administer the law at the time, and I’m sure they were making people mad.”

Most mayor’s court cases “had to do with somebody having a little too much to drink and not making it home. People would find them, and they would report them to the mayor that so-and-so was found intoxicated and they would have to appear” in mayor’s court, Wyse said.

“I did find some relatives in there, but we won’t get into names.”

There are bills that were submitted to council and paid, and oaths of office signed by office holders, including one from August Ruihley, the mayor for whom Ruihley Park was named.

There were not only bonds, but coupons attached to the bonds that investors redeemed to receive payment.

The bond could be redeemed at the People’s State Bank.

Wyse said a few years ago, a wealth of old village records was found in a dumpster.

“No one has taken an interest in making sure this stuff is taken care of, and obviously at some point years ago, somebody was just throwing the stuff away.

“Not that there’s a use for it today, but at the same time, this is our history, and I don’t think we should just throw it away.”