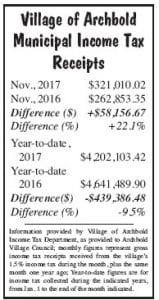 Donna Dettling, Archbold village administrator, said the village municipal income tax will “most definitely hit $4.6 million by the end of the year.”

However, Dettling said during 2016, the village converted from a quarterly-based collection system to monthly collections as a result of a change in state law, which skewed the total collection figure to the high side.

With the new collection system, which went into place at the start of 2017, Dettling said the village has consistently brought in $300,000 to $400,000 per month in revenue.

She expects the 2017 total collection to hit the $4.6 million mark.