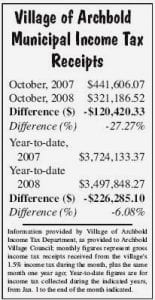 Joan Lovejoy, village finance director, told Archbold Village Council members at the Monday night, Nov. 3, meeting two major employers in the village went from doing their own payroll to hiring an outside service.

When companies make the switch, sometimes the money withheld from paychecks is submitted a month later.

Such was the case earlier in the year when one major employer outsourced its payroll services.

“When those two others come in during November, it may make a dent” in the muni tax shortfall, she said.

Because the December collection is traditionally relatively small, Lovejoy told council members by the end of November, village officials will have a clearer picture of the tax revenue available.