The total collection from the Archbold Municipal Income Tax during 2017 topped $4.5 million, down almost 7.8% from the record year of 2016.

But Donna Dettling, village administrator, said she is satisfied with the 2017 results.

For several months, Dettling has been cautioning Village Council that the 2016 total collection of more than $4.9 million was an anomaly because of a change in state reporting requirements.

For years, Ohio law required income tax results to be reported on a quarterly (once every three months) basis.

Then the requirements changed from quarterly to monthly.

Dettling said 2016 was the transition year, the first year for monthly reports.

In a report to council, Dettling said the change “impacted the transition year of 2016. 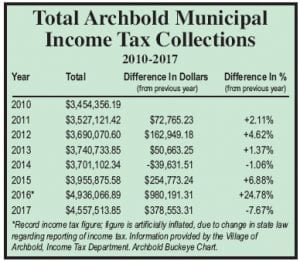 She confirmed the $300,000 figure with Patty Dominique, former head of the income tax department, now retired.

“Patty confirmed there were receipts from 2015 that ended up in 2016 due to the transition to monthly reporting,” Dettling said.

A time of economic downturn, known as “The Great Recession,” started in December 2007 and ended in June 2009, information from the Federal Reserve Bank of New York states. It was the longest period of recession since WWII.

The period of 2007-2010 was the first time the income tax failed to outpace the previous year more than twice in a row since the tax was first established just over 50 years ago.

The municipal income tax was first established in 1967.

Since then, the tax has generated a total of $120.8 million, which is generally spent on capital projects such as building new streets or reconstruction.– David Pugh