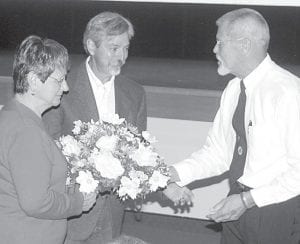 Lenny Miller, far right, an officer with the Archbold American Legion post, presents flowers to Terry Aeschliman and Cindy Winzeler, brother and sister of David Aeschliman, an AHS graduate who was killed in Vietnam. The presentation was made during a program at the high school, Thursday, Sept. 20.– photo by David Pugh

“We did not lose the (Vietnam) war. We had all the firepower we needed.

“It was a political war that we had to fight with one hand tied behind our back.”

The program included a special tribute to David Aeschliman, an AHS graduate and Army helicopter pilot who was killed in Vietnam.

Oberhaus explained the veterans appearing at AHS were members of the Army’s first Artillery Combat Leadership school, which had a reunion in Archbold.

He told students several stories from Vietnam, including the time he witnessed a booby-trapped Vietnamese child blow herself up to kill American soldiers.

Vietnam veterans were not welcomed home when they returned to the U.S., but now they are being recognized, he said.

Lenny Miller, an officer of the Archbold American Legion Post, gave the tribute to Aeschliman.

He said on Jan. 12, 1970, Aeschliman, an Army warrant officer, was flying his helicopter along a line of enemy bunkers in an attempt to draw enemy soldiers into the open, when his helicopter was hit by ground fire and crashed.

Aeschliman was awarded the Distinguished Flying Cross and the Purple Heart for his actions.

AHS students presented the veterans with plaques honoring them for their service to the country.