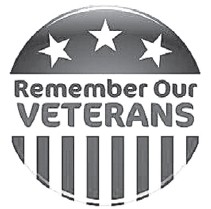 Sunday is Nov. 11, the date that has been officially designated as Veterans Day, the day America honors the service of the men and women who have defended our nation, its people, and oppressed people around the world who want freedom.

Because Veterans Day falls on a Sunday, the holiday will be observed on Monday, Nov. 12.

We are surrounded by veterans every day. Often, we are surprised to learn persons we would never have suspected as having been in the military, are, in fact, veterans.

And yet, their numbers are relatively small.

The United States Census Bureau estimated that last year, of the almost 315 million people living in the United States, 21.5 million were veterans of the armed forces– the Army, Navy, Air Force, Marines, and Coast Guard.

About 3.5 million have a service-related disability, ranging from an accident while in military service, to being wounded in combat. More than 810,000 are over 70% disabled.

Whether you celebrate Veterans Day on Sunday or Monday, take a moment to thank a veteran for his or her service, and remember those who gave their lives for their country.