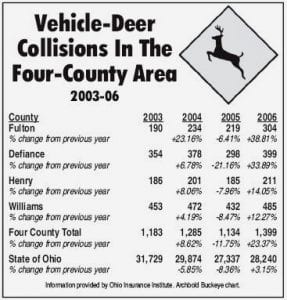 The number of collisions involving motor vehicles and deer increased by almost 40% in Fulton County from 2005 to 2006.

Statistics from the Ohio Insurance Institute, an insurance industry trade association, indicate that in 2005, there were 219 vehicle-deer collisions in Fulton County. That number jumped to 304 in 2006, a 38.81% increase.

While the Fulton County percentage of increase is the highest in the four county area, Williams County had the most vehicle-deer crashes in each year from 2003 to 2006. In 2006, OII statistics show there were 485 vehicle deer crashes there.

In a press release, OII officials say that during 2006, vehicle-deer crashes caused 12 deaths, and 1,024 injures.