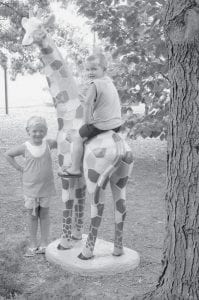 The grandchildren of Wayne and Donna Kauffman, Archbold, went to the Ross Taylor garden for pictures with the giraffe. Zackary, 4, and sister Alexa, 6, children of James and Lana Evans, Goshen, Ind., appear with the statue that was removed from behind the Archbold Buckeye office, in Paradise Alley. The giraffe was a popular photo opportunity for adults and children.

Vandals removed the giraffe sculpture from behind the Archbold Buckeye newspaper office sometime during the night of Friday, July 18.

Archbold police notified Brent Taylor, one of the newspaper owners, that the giraffe was discovered in the middle of Holland Street, between the Stotzer building and Carol Ann’s City Cafe.

B. Taylor returned the giraffe to its location behind the Buckeye office upon being notified by the police department.

Since then, it has been removed to its original location, the Ross Taylor garden, 205 Church Street.

The giraffe’s ear was broken off and the neck was damaged; the rest of the sculpture had chip damage.

Ross Taylor believes there might have been alcohol on the breath of the vandals.

Adults and children enjoyed having their picture taken with the concrete giraffe.

There was no record of the event on the police log.