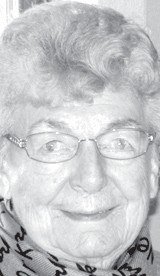 Valetta was born in Archbold to Harley and Fannie (Aeschliman) Nofziger.

Valetta was a wife and a homemaker her whole life in the Archbold area, and a graduate of Archbold High School.

She accepted Jesus Christ as her Savior as a young person and served Him faithfully all her life. She actively attended West Clinton Mennonite Church.

Valetta enjoyed music, and was a member of several singing groups while growing up and into her adult life.

She enjoyed working with her hands crocheting and sewing and made many beautiful gifts for family and friends.

Her children and grandchildren were richly blessed with many of her beautiful handmade Christmas gifts. She was creative and not afraid to try new craft projects.

Valetta was preceded in death by her parents; one son, Jerry Beck; one brother, Loyal Nofziger; and two sisters, Lois Aeschliman and Lorene Eash.

Short Funeral Home has been entrusted with the arrangements.

A celebration of life was held at West Clinton Mennonite Church on Friday, Oct. 6, at 4 pm.