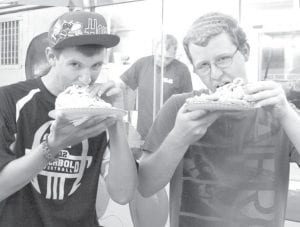 Bradly Lawrence, at left, and Kain Tuckerman, 2012 AHS graduates, enjoy a couple of funnel cakes at the 2012 Fulton County Fair.

As we come to summer’s end, the fair is the event everyone’s been waiting for all summer long, and it’s no surprise.

For evidence, look no farther than what’s slated for the fair, which is expected to attract well over a quartermillion visitors.

New to the lineup is a free concert on Thursday evening featuring “The Shades of Blue.”

There’s plenty of gearjamming, gasket-busting, man-versus-machine excitement on the schedule in the form of truck and tractor pulls, a pickup truck pull, and Ohio’s greatest demolition derby.

There’s the new 9/11 Memorial at the north end that pays tribute to the victims of 9/11, along with those who serve in the military.

There are agricultural displays and competitions, harness racing, midway rides, and “fair food,” a mouth-watering collection of culinary delights that many Fulton County tastebuds long for the other 51 weeks of the year.

Headlining the Fair’s Labor Day Country Concert is Moore, a native of Poyen, Ark. (population of 272), who moved to Nashville at the young age of 18.

Opening for Justin is Houser, who has written numerous songs for major singers like Trace Adkins, Justin Moore and Chris Young.

Sunday’s 7:30 p.m. concert is one that 28 Fulton County high school students will remember for a lifetime.

Foreigner has invited local high school students to share the stage for their song, “I Want to Know What Love is.”

The 28-student choir is comprised of four students from each of the seven Fulton County high schools.

For their involvement, Foreigner and the Grammy Foundation will donate $500 to the annual Fulton County All-County Music Festival.

At 7:30 p.m. Saturday, baby boomers can twist the night away at the Van-Dells’ ‘50s and ‘60s concert, presented free of charge at the South Stage, courtesy of the Fulton County Fair Board.

And to show its appreciation of the great community support, the Fair Board is hosting another free concert at 6:30 p.m. on Thursday featuring soul group “The Shades of Blue.”

This versatile, high-energy group is known for their musical talent, choreography, and Las Vegas-style comedy.

On Sunday, “Adam’s Voice” will lead the 10:30 a.m. worship service in the Christian Music tent.

“All Things New” takes the stage at 5 p.m. for a free concert sponsored by the Fulton County Christian Music Ministries.

Sunday is also the start of a three-day series of cornhole competitions, with mixed doubles taking place on Monday and youth giving it a toss on Tuesday, which is Junior Fair Day.

Equine aficionados will enjoy five days of horse events, including Junior Fair and open class judgings, harness racing on Saturday at 1 p.m. and Tuesday at 6 p.m. with pari-mutuel wagering.

The Michigan Miniature Horse Pull and Bits & Harness Pony Pull draw in the spectators on Sunday starting at 5 p.m.

From beginning to end, the Fulton County Fair has a slew of gear-jamming, clutch-popping, eardrumthreatening activities for those who prefer their horsepower mechanized, their art rough-hewn, and their competitions L-O-U-D.

On Friday, NTPA-sanctioned tractor and truck pulls roll into the Fulton County Grandstand infield at 6:30 p.m.

On Saturday, competitors in the Pickup Truck Pulls will flex their motorized muscle in the infield beginning at 6:30 p.m.

Finally, on Thursday, the Demolition Derby will rumble like dirty thunder into the fair’s final hours for clashes at 6:30 p.m., bringing the 156th edition of the Fulton County Fair to a (forgive us!) bang-up conclusion.

Saturday through Wednesday afternoon, fairgoers need to be on their best behavior in order to avoid getting ticketed by Barney Fife (impersonator), the bumbling deputy of Mayberry who will be mingling with the crowd, passing out tickets, and catch fairgoers off guard with his antics.

And, back by popular demand, the firefighter show will take place Saturday through Tuesday, sharing important fire safety tips and offering youth to be on a “firefighting” team.

Throughout Fair Week, hundreds of exhibitors young, old, and everywhere in between will vie for blue ribbons in categories that range from traditional livestock and agricultural displays to photography, needlework, and cake decorating.

Midway rides will be up and running, the South Stage and Christian Music tent will feature free entertainment all week long, people can stroll through the special south-end display featuring the history of transportation, and dozens of food vendors will serve up copious amounts of deepfried veggies, creamy milkshakes, homegrown pork and beef sandwiches, freshsqueezed lemonade, elephant ears, Belgian waffles, and dozens of other hard-toresist fair treats.

As always, the fair offers free admission to special groups of fairgoers on specified days until 6 p.m.: to veterans and their spouses, on Saturday, to schoolchildren on Junior Fair Day, Tuesday (along with special ride prices from 11 a.m. to 5 p.m.); and to senior citizens ages 65 and up on Wednesday. Free admission does not include ticketed shows.

Parking is free. All children 15 and under who are accompanied by an adult are admitted free.