Unemployment Up, Still Under 5% In County 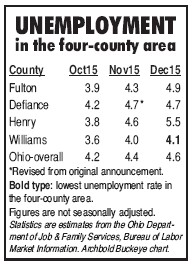 The Ohio Department of Job & Family Services reported that Fulton County unemployment during December 2015 was 4.9%, up six-tenths (.6) of a percentage point from the preceding month.

It was the second straight month Fulton County unemployment has increased, creeping up from a low of 3.9% in October to 4.3 % in November to 4.9% in December.

Unemployment increased in three counties in the four-county area. Williams County had the lowest rate, at 4.1%. Henry County had the highest rate, 5.5%. Defiance County held steady at 4.7%; ODJFS had revised the November county rate from 4.6% to 4.7%.

Fulton County has the largest labor force in the four-county area.

ODJFS officials said out of the 88 counties in the state, unemployment increased in 68, decreased in six, and did not change in 14 counties.

The highest rate in the state was in Monroe County, in southeastern Ohio on the West Virginia border, at 10.7%.

It was the first time since February 2015 that the highest rate in the state was in double digits (10% or higher).

Mercer County, on the Indiana border in central Ohio, had the lowest rate, at 3.1%.

The Fulton County rate was in a four-way tie for 43rd-highest in Ohio.

Unadjusted figures for December for the state and the nation were 4.6% and 4.8%, respectively.

When seasonal adjustments are calculated, the Ohio rate is 4.7%; the national figure, 5%.

ODJFS estimated that there were more than 5.7 million people in the Ohio labor force, of which almost 5.5 million were employed while an estimated 263,900 were out of work.