Unemployment Up In County For June 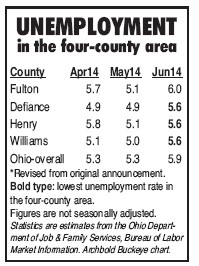 Unemployment in Fulton County climbed from a record low 5.1% in May to 6% during June, according to the Ohio Department of Job & Family Services.

It’s the first increase in unemployment in the county since the start of the year.

Unemployment was up in 85 of Ohio’s 88 counties in June, as well.

The 6.0% Fulton County rate was the highest in the four-county area. Unemployment was 5.6% in Defiance, Henry, and Williams counties.

ODJFS estimated there were 1,300 persons unemployed in Fulton County during June. With 20,700 people employed, that gave the county a total labor force of 22,000.

Monroe County, in southwest Ohio on the West Virginia border, had the highest unemployment rate in the state, at 11.7%. It was the only county in Ohio with double-digit unemployment.

Mercer County, in central Ohio on the Indiana line, had the lowest rate, at 3.3%.

Fulton County tied with Ross and Montgomery counties for the 35th-highest rate in the state. Twenty-one had unemployment of 4.9% or lower.

Economists generally consider locations with 5% unemployment as having “full employment.”

All county unemployment data is not seasonally adjusted. The comparable June unemployment figures for Ohio as a whole and the United States are 5.9% and 6.3%, respectively.

When seasonal adjustments are applied, the Ohio rate becomes 5.5%; the national rate drops to 6.1%.

ODJFS estimated that there were 339,800 persons out of work. When combined with more than 5.4 million Ohio workers who are employed, the state’s overall labor force is almost 5.8 million.