Unemployment Up In 85 Of 88 Ohio Counties: ODJFS 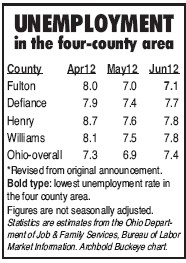 Unemployment in the State of Ohio increased by about a half a percentage point for the month of June, the Ohio Department of Job and Family Services announced last week.

Unemployment increased in each of the counties that make up the four-county area.

Increases ranged from three-tenths of a percentage point (.3%) for Defiance and Williams counties, to twotenths of a point (.2%) for Henry County and one-tenth of a point (.1%) for Fulton County.

Fulton County had the lowest rate in the four-county area for the second straight month, at 7.1%.

Of Ohio’s 88 counties, 85 had their unemployment rates increase.

The lowest unemployment rate in the state in June was in Mercer County, at 4.6%.

Pike County had the highest, at 13%. Overall, 10 Ohio counties had unemployment rates of 10% or higher.

Fulton County was in a five-way tie for 56th highest, with Knox, Shelby, Green, and Summit counties.

All county unemployment figures are not seasonally adjusted.

Comparable figures for the Sate of Ohio and the nation as a whole are 7.4% and 8.4%, respectively.

When seasonal adjustments are applied, the Ohio unemployment rate is 7.2%. The national rate is 8.2%.

ODJFS estimated during June, Ohio had a labor force of more than 5.8 million, with about 5.4 million employed, and 439,200 unemployed.– David Pugh