Unemployment Up During June: ODJFS 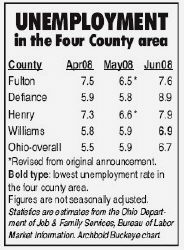 Fulton County unemployment jumped 1.1 percent during June, according to figures by the Ohio Department of Jobs and Family Services.

In May, ODJFS estimated the county unemployment rate at 6.6%. In June, ODJFS revised the May figure to 6.5% and announced the June rate was 7.6%.

All counties in Fulton Defi- ance, Henry, Williams saw June unemployment rates go up by at least one point, but the Defiance County rate jumped by 3.1%.

ODJFS estimated that during June, there were 23,600 persons in the Fulton County workforce; 21,800 were employed and 1,800 were out of work.

Fulton County tied with Ross County, in south central Ohio, for the 22nd highest unemployment in the state.

Meigs County had the highest unemployment rate, 10%. Holmes, Delaware and Mercer counties had the lowest, 4.9%.