Unemployment Up Across Four Counties 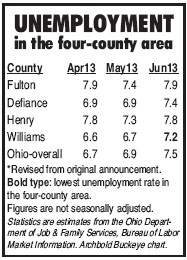 Unemployment in the fourcounty area went up one-half of one percentage point during June, the Ohio Department of Job and Family Services reported last week.

Unemployment in the area ranged from a high of 7.9% in Fulton County to a low of 7.2% in Williams County. Defiance County unemployment was 7.4%; Henry County, 7.8%.

Since January 2005, the Fulton County unemployment rate, as estimated by ODJFS, has been between 7% and 7.9% for 18 months.

ODJFS estimated during June, 1,700 workers were unemployed and seeking work. When combined with the 20,400 workers in the county who are employed, ODJFS estimated the total Fulton County workforce was 22,200 workers; numbers do not add due to rounding.

Of Ohio’s 88 counties, Fulton County had the 38thhighest unemployment rate.

Unemployment rates in all 88 Ohio counties increased from May to June, ODJFS reported.

Meigs County, in southeastern Ohio, had the highest rate in the state, at 12.7%.

There were 11 counties with double-digit (10% or higher) unemployment.

Mercer County, in central Ohio on the Indiana border, had 4.6% unemployment, the only county where ODJFS said unemployment was less than 5%.

All county unemployment rates are not seasonally adjusted. Comparable June rates for Ohio as a whole and the nation were 7.5% and 7.8%, respectively.

When seasonal adjustments are applied, the Ohio rate coverts to 7.2%, while the national rate is 7.6%

Overall, ODJFS estimated that during June, 436,000 Ohioans were out of work and looking for jobs.