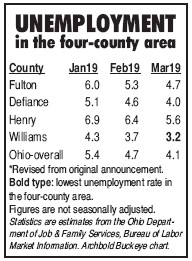 The Ohio Department of Job and Family Services announced that during March, unemployment in Fulton County was down six-tenths (.6%) of a percentage point, to 4.7%.

In fact, across the 88 counties in Ohio, rates fell in 87 counties, while one remained the same.

Unemployment in Fulton County started the year in January at 6%, the highest rate recorded in the county in 23 months. It fell to 5.3% in February.

Fulton County was in a three-way tie with Stark and Tuscarawas counties for the 37th-highest rate in the state.

Henry County had the highest rate in the four-county area, at 5.6%. Williams had the lowest, at 3.2%.

Figures do not add due to rounding.

All county data is not seasonally adjusted.

Comparable figures for Ohio and the United States as a whole were 4.1% and 3.9%, respectively.

When seasonal adjustments are applied, Ohio was at 4.4%; the nation was 3.8%.

There were 5.8 million workers in the Ohio labor force, with about 5.57 million working. There were an estimated 240,700 out of work.