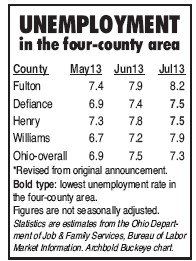 That’s an increase of threetenths (.3) of one percentage point from June, when unemployment was 7.9%

Across the four-county area (Fulton, Defiance, Henry, Williams), unemployment was up in three counties. Only Henry County saw a decrease, where unemployment declined from 7.8% in June to 7.5% in July.

Williams County had the largest increase, up sixtenths (.6) of one point from June to July. Defiance and Henry counties tied for the lowest unemployment, at 7.5%.

ODJFS estimates indicate in July, there were 1,800 workers unemployed in Fulton County. An estimated 20,400 were employed, for a total labor force of 22,200, the largest in the four-county area.

Fulton County tied with Columbiana County, in northeast Ohio along the borders with Pennsylvania and West Virginia, and Lorain County, in north central Ohio with a border on Lake Erie, for the 25th-highest unemployment rate in the state.

Of the 88 counties in Ohio, unemployment rates went down in 68, ODJFS estimated.

Meigs County, in southeastern Ohio, had the highest unemployment rate in the state, at 12.3%.

Nine counties had unemployment rates of 10% or higher.

Mercer County, in central Ohio on the Indiana border, had the lowest unemploy- ment in the state, at 4.5%.

Holmes County, in eastcentral Ohio, had 4.9% unemployment. They were the only two Ohio counties with unemployment under 5%.

Comparable, unadjusted figures for the state and the nation were 7.3% and 7.7%, respectively.

ODJFS estimated that during July, there were 5.8 million workers in the Ohio labor force, with approximately 5.4 million employed and 425,000 unemployed.