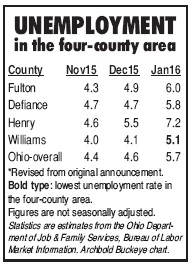 Unemployment in the four-county area, and Ohio as a whole, spiked in January.

Such spikes are not uncommon. Unemployment figures, based on Ohio Department of Job & Family Services estimates, typically hit highs during January and fall as the year goes on.

Over the previous seven years, the trend of high January unemployment in Fulton County has played out six times.

In the past seven years and two months, the highest unemployment level was 16%, in January 2010.

Henry County had the highest rate in January, going from 5.5% in December to 7.2% in January, a 1.7% increase. It’s the largest jump in the four-county area.

Williams County had the smallest increase, 5.1% in January. Defiance County rate was at 5.8%.

ODJFS estimated during January, there were 1,400 people out of work in Fulton County. Combined with 21,300 workers on the job, the county total labor force stood at 22,700, up 200 from December.

Monroe County, in south- eastern Ohio on the West Virginia border, had the highest unemployment rate in the state, at 13.8%.

Monroe County has had the highest rate in the state since February 2015.

Five Ohio counties, in southern and southeastern Ohio, had rates of 10% or more.

Fulton County was in a six-way tie for the 44th highest rate out of 88 Ohio counties. Other counties in the group were Clark, Knox, Marion, Fayette, and Portage.

Comparable figures for Ohio and the nation as a whole for January were 5.7% and 5.3%, respectively.

When seasonal adjustments are applied, the rates for Ohio and U.S. were both 4.9%.

During January, there were just shy of 5.7 million people in the Ohio labor force, with about 5.3 million working and 324,600 out of work.