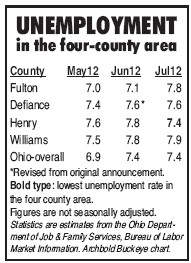 County unemployment was estimated at 7% in May, ticked up to 7.1% in June, then went up seven-tenths (.7) for July.

Angela Terez, spokesman for ODJFS, said department officials could not trace the increase in unemployment to any specific event, other than the usual summer layoffs in the auto industry.

The county’s July unemployment was second highest in the nearby four counties. Williams County had the highest rate, at 7.9%. Defi- ance County was at 7.6%, and Henry County was lowest at 7.4%.

Fulton County was tied with Hardin County for 36th-highest unemployment in the state.

Pike County had the highest

Mercer County in westcentral Ohio on the Ohio-Indiana border had the lowest, at 4.4%.

There were 10 Ohio counties with unemployment rates of 10.2% or higher.

Two counties were under 5%; seven had rates under 6%.

All county unemployment data is not seasonally adjusted. The comparable rate for the state and the nation were 7.4% and 8.6%, respectively.

When seasonal adjustments are applied, the July Ohio rate becomes 7.2%. The national rate is 8.3%.