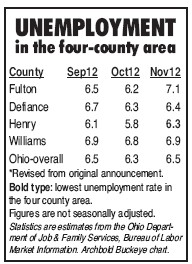 The Fulton County unemployment rate increased nine-tenths (.9) of a percentage point between October and November 2012, the Ohio Department of Job and Family Services said last month.

The estimated unemployment rate in Fulton County was 7.1% for November, the highest in the four-county area.

Unemployment increased in the four-county area and in 66 of Ohio’s 88 counties.

Benjamin Johnson, an ODJFS spokesman, said across the state there was a lot of hiring by the retail sector in preparation for the holidays, but it was not enough to offset layoffs in seasonal industries such as construction and leisure and hospitality.

For statistical purposes, Fulton County is part of the Toledo metropolitan area. Fulton, Lucas, Ottawa, and Wood counties are considered to be the metro area.

Johnson said across the metro area during November, about 2,100 jobs were added in the retail sector, but that led to a total net increase of only 400.

After February 2012, unemployment declined until July, when the rate spiked at 7.8%. After July, it continued to drop until October, when it reached a low of 6.2%.

ODJFS estimated that the Fulton County labor force was made up of 21,800 persons; 20,300 were employed, and 1,500 were unemployed and seeking employment.

Mercer County, on the Indiana border in central Ohio, had 3.9% unemployment, the lowest in the Buckeye state.

The Fulton County unemployment rate was the 30thhighest in Ohio.

All county unemployment rates are not seasonally adjusted. Comparable rates for the state and the nation are 6.5% and 8%, respectively.

When seasonal adjustments are applied, the U.S. rate is 7.7%. The unemployment rate for the state increases to 6.8%.

ODJFS estimated that during November, Ohio had almost 5.4 million employed workers, with about 373,900 out of work, for a total labor force of about 5.77 million.