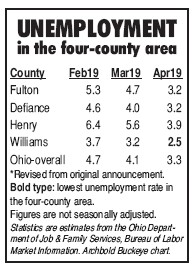 The Fulton County unemployment rate for April was 3.2%, a new record low.

The Ohio Department of Job &Family Services announced the new rate, Friday, May 17.

The Archbold Buckeye has kept detailed unemployment rate records for 10 years and five months, starting in December 2008. The previous low was 3.5% in September 2018.

Fulton County unemployment has been below 4% ten times since December 2008– seven times in 2018 alone.

Statewide, unemployment went down in each county.

Mercer County, in central Ohio on the Indiana border, had the lowest rate, at 1.9%. In addition to holding the lowestrate title for at least 28 straight months, Mercer County was the only county in Ohio with unemployment under 2%.

All county data is not seasonally adjusted. Comparable figures for the state and the nation were 3.3% each.

When seasonal adjustments are applied, Ohio increased to 4.3%, while the national figure was 3.6%.

ODJFS estimated that during April, there were 5.6 million Ohio residents who were working, with about 192,300 out of work. The total state labor force was about 5.79 million.