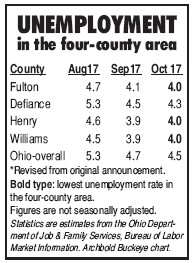 The Ohio Department of Job & Family Services said the Fulton County unemployment rate hit a new low for 2017, coming in at 4%.

During 2017, unemployment in the county has ranged from a high of 6.2% in January to the new low of 4% in October.

Three of the counties in the four-county area had 4% rates. Henry and Williams were also at 4% for October. Defiance County was at 4.3%.

Unemployment in Fulton County has been 4.9% or lower 27 times since December 2008.

The lowest rate was 2.8% in Mercer County, on the Indiana border in central Ohio. Mercer County has held the lowest-rate title for 19 consecutive months.

The highest rate was in Monroe County, in southeastern Ohio on the West Virginia border, at 7.1%.

All county unemployment data is not seasonally adjusted. Comparable figures for Ohio and the nation as a whole were 4.5% and 3.9%, respectively.

When seasonal adjustments are applied, Ohio was 5.1%; the national rate was 4.1%.

During October, there were 260,700 people unemployed in the state. There were more than 5.5 million working, for a total labor force of about 5.77 million.