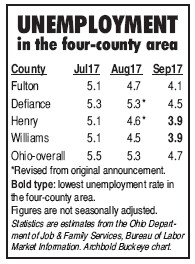 Unemployment in Fulton County for September was 4.1%, a new low for the year.

Information from the Ohio Department of Job & Family Services indicates the estimated unemployment rate in August was 4.7%

In September, the figure dropped six-tenths (0.6)%.

Defiance County was higher, at 4.5%. Henry and Williams counties tied for the lowest rate in the four-county area, at 3.9%.

During September, there were 1,100 persons unemployed in Fulton County and 21,700 persons employed, for a total labor force of 22,800.

Fulton County was in a five-way tie for the 57thhighest rate in the state. Other counties with 4.1% unemployment were Wood, Hamilton, Butler, and Pickaway.

Two other counties had rates of 7% or higher: Monroe County, in southeast Ohio (7.5%), and Mahoning County, which shares borders with Trumbull County and Pennsylvania (7.0%).

All county unemployment data is not seasonally adjusted. Comparable figures for Ohio as a whole and the nation were 4.7% and 4.1%, respectively.

When seasonal adjustments are applied, Ohio was 5.3%; the national rate was 4.2%.

ODJFS estimated there were 270,800 Ohio residents out of work. There were almost 5.5 million employed, for a total labor force of about 5.77 million.