Unemployment Goes Down In Fulton County 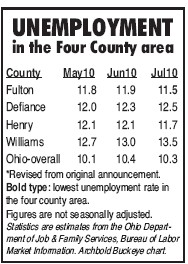 Unemployment was up in Defiance and Williams counties but down in Fulton and Henry during the month of July, Ohio Department of Job and Family Services estimates state.

Fulton County unemployment fell from 11.9% in June to 11.5% in July, a fourtenths (.4) of a percentagepoint drop. The 11.5% figure is the lowest in the fourcounty area.

Williams County unemployment went from 13% in June to 13.5% in July, an increase of a half (.5) of a percentage point, the highest in the four-county area during July.

Fulton County was in a four-way tie for the 34thhighest unemployment rate among Ohio’s 88 counties. The other counties with 11.5% unemployment are Champaign, Richland, and Montgomery counties.

ODJFS estimated that the Fulton County labor force was composed of 22,700 people. Of those, 20,100 were employed, while 2,600 were out of work. Only Williams County, with 2,700 out of a job, had a large number of unemployed people.

Across Ohio, ODJFS estimated that 617,800 Ohioans were out of a job. Another almost 5.4 million were employed, for a total labor force of just over 6 million.

All county data is not seasonally adjusted. The Ohio and U.S. unemployment rates for July were 10.3% and 9.7%, respectively.

When seasonal adjustments are applied, Ohio’s unemployment rate remained unchanged, while the national figure dropped to 9.5%.