Unemployment Falls To 8% For April 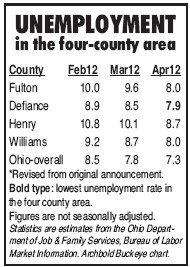 The Fulton County unemployment rate hit 8% in April, the lowest rate for the county since November 2011, the Ohio Department of Job and Family Services reported.

Defiance County continues to maintain the lowest rate in the four-county area, at 7.9% in April.

ODJFS estimated that during April, Fulton County had 21,800 people in its labor force. That was made up of 20,000 people employed, and 1,700 seeking employment. The figures do not add due to rounding.

Defiance County was in a four-way tie for 35th-highest unemployment rate.

All county-level unemployment data is not seasonally adjusted.

The comparable, unadjusted rates for the month of April for Ohio as a whole, and the nation, were 7.3% and 7.7%, respectively.

When seasonal adjustments are applied, the national unemployment rate was 8.1%. The state figure is 7.4%.

ODJFS estimated that out of more than 5.77 million people in the Ohio labor force, more than 5.3 million were employment.

The number of unemployed workers in the state during the month of April was estimated at 418,500.