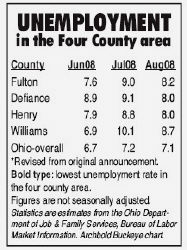 Fulton County unemployment fell from 9% in July to 8.2% in August, according to estimates from the Ohio Department of Job and Family Services.

The Fulton County unemployment rate dropped eight-tenths (.8) of a percentage point. Defi- ance and Henry County dropped to 8% in August.

Williams County had the highest unemployment rate in the four counties of Fulton, Defi ance, Henry, and Williams, falling from an estimated 10.1% in July to 8.7% in August, a decline of 1.4 percent.

Delaware and Holmes counties had unemployment rates of 5.2%, the lowest in Ohio.

Meigs and Morgan counties had the highest unemployment, at 10.8%.

All county unemployment data is not seasonally adjusted. Comparable figures for Ohio as a whole was 7.1%. The national unadjusted rate in August was 6.1%.

When seasonal adjustments are applied, the Ohio rate rises to 7.4%; the national rate is unchanged.