Unemployment Down After January Spike 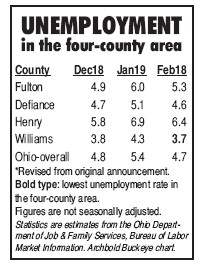 After a sharp spike in unemployment in January across Fulton County and the rest of Ohio, it went down statewide in February.

The Ohio Department of Job and Family Services announced unemployment was 5.3%, down seven-tenths (.7) of a percentage point from January.

Prior to January, unemployment had not exceeded 5% since July 2018.

The highest rate in the four-county area was in Henry County, at 6.4%. Williams County was the lowest, at 3.7%.

Fulton County has the largest labor force in the fourcounty area.

Mercer County, in central Ohio on the Indiana border, had the lowest rate in the state at 2.9%, a position it has held for 26 consecutive months.

Monroe County, in southeast Ohio on the West Virginia border, had the highest rate in the state, at 10.4%.

All county data is not seasonally adjusted. Comparable figures for the sate and the United States was 4.7% and 4.1%, respectively.