Unemployment At 6% In January 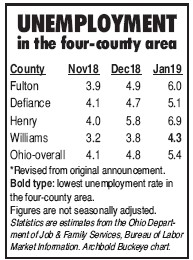 The Ohio Department of Job and Family Services announced unemployment in Fulton County during January was 6%, the highest in 23 months.

Unemployment was 6.2% in February 2017 as originally announced by ODJFS. From March 2017 to December 2018, County unemployment never exceeded 5.4%.

It’s not unusual for unemployment to peak early in a new year. Since 2010, the originally announced rate for the county hit its highest point in either January or February of each year. Unemployment was 6% in January 2016.

Henry County had the highest rate in Northwest Ohio, at 6.9%, with the exception of Ottawa County, at 10.1%.

Defiance County was 5.1%. Williams County had the lowest rate in the four-county area, 4.3%.

Unemployment increased in each county in Ohio in January.

The highest rate in the state was in Monroe County, in southeast Ohio on the West Virginia border, at 12.1%.

The lowest rate was in Mercer County, in central Ohio on the Indiana border, at 5.4%.

All county unemployment data is not seasonally adjusted. Comparable figures for the state and the nation were 5.4% and 4.4%, respectively.

When seasonal adjustments are applied, Ohio was 4.7%, while the national rate was 4%.