Recuperating From 2008 Tractor Accident And May 29 Auto Crash

Just over two years ago, 13-year-old Tyler Priest was involved in a farm accident that nearly cost him his life.

He tried to board a tractor while the vehicle was moving, but slipped and fell under a wheel. The vehicle ran over his head and chest.

But the former Archbold resident wasn’t ready to give up.

The most serious of the injuries Tyler suffered was a brain stem bleed. The injury put him in a coma.

After 88 days of hospitalization, Tyler, the son of Bob Priest and Kara Priest, Van Wert, was allowed to return home to continue his recuperation.

He recovered to the point that even though he has trouble with his vision, and was using a walker to get around, he wrestled for the Van Wert junior high school team. He racked up a 4-2 record in the 163-pound class.

But fate decided Tyler, now 15, had not had enough.

He was riding in a car with two cousins on May 29, when the driver lost control. 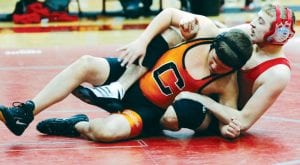 Tyler Priest (in red singlet) puts a move on an opponent during the 2009-10 wrestling season. The 15-year-old, formerly of Archbold, was run over by a tractor on July 6, 2008. He was able to wrestle for the Van Wert junior high team last year.– courtesy photo

The car rolled as many as six times. While he was wearing his seat belt, Tyler broke his right humerus (upper arm bone) in two places, the upper portion of his right hip, and the left tibia and fibula (lower leg bones).

The crash also “took two huge chunks” off the top of his left foot, his father said.

It was the first time he had worn flip-flops.

Tyler spent another 17 days hospitalized as a result of the crash. He returned home for three days, then developed a staph infection and had to return to the hospital for another 10 days.

“I just sat there and let the car roll,” he said.

Tyler underwent a sixhour surgery the night after the car crash, then had two more three-hour surgeries plus a skin graft on his injured foot.

“It’s not been a great summer,” Bob said.

Despite it all, Bob reports his son has a good attitude.

“His life has changed. He can’t get out and go like he did.

“But he’s not one to sit and feel sorry for himself.

“Let’s not focus on what he can’t do– let’s look at what he can do, and go on from there,” Bob said.

As a result of the first accident, Tyler speaks slowly. But his sentences are complete, and his thoughts flow freely.

Also, as a result of some severed cranial nerves, his vision is limited, and his pupils don’t react to changes in light.

He said he’s getting used to that, but he still wears sunglasses in school “because it’s cool.”

Tyler said his school friends at Van Wert don’t tease him about his use of the walker, slow speech, or other problems.

But he has gotten some good-natured ribbing. Friends sent Tyler cookies, and bubble wrap, to protect him in case of another crash.

Tyler’s had a lot of support from friends, but sometimes missed out on things.

As is typical with youngsters of junior high school age, plans are always made at the last minute. Since he’s often not there when the plans are made, “sometimes Ty has to deal with not always being included,” Bob said.

Bob is a former teacher and football coach at Archbold High School; Kara is a nurse. Tyler also has three sisters.

After Tyler’s accident in 2008, the Archbold community rallied around the family, showering them with prayers and support, including fund-raisers to help defray medical expenses.

Tyler said he has not heard from any of his Archbold friends recently.

“I’ve been through a lot,” Tyler said, in his slow, determined speech.

But he’s been keeping a positive attitude, keeping himself in good spirits?