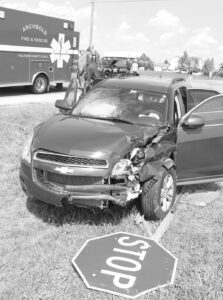 This vehicle was one of two involved in a crash at the intersection of St. Rt. 34 and Henry Co. Rd. 24, Friday, Aug. 20. The intersection has been the scene of several crashes, including a fatal crash on Tuesday, June 15.– photo by David Pugh

Two people were taken to Community Hospitals & Wellness Centers-Bryan, Friday, Aug. 20, following a two-vehicle collision at the intersection of St. Rt. 34 and Henry Co. Rd. 24 at 11:49 am.

The HCSD report states Hope failed to yield, drove into the intersection, and they collided.

Passengers in Hope’s SUV, Andrew Vollmar, 9, and Grayson Vollmar, 6, all of the same Liberty Center address, were not injured.

Deputies cited Hope for failure to yield the right-ofway.