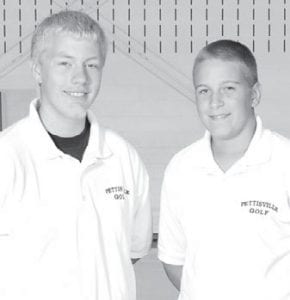 The Pettisville golf team has just two returning letterwinners for Ed Bracken, 15- year head coach, as the 2010 season gets underway.

Torin Blosser, a senior, and Tyler Herschberger, a sophomore, are back and hope to improve on a 4-14 record from last season.

“The team will have the enthusiasm of youth who want to play golf,” said Bracken. “There are two freshmen who could play and a firstyear player who may help out.

“There is also a junior who has worked hard to break into the varsity who could help.

“If you mix in a couple of seniors, who should add some leadership to the team, we will be competitive.”

While the Birds have enthusiasm, Bracken said, “the youth of the team will be a weakness. It is tough to predict how a team made up of so many first-time competitors will react to the competition.

“Some may take to it while others will not be able to perform at their best.

“I expect, because of our youth, we will lose a number of matches. How they will react to losing is also hard to predict.”

Bracken said he is optimistic about the season.

“I am always curious at watching how the golfers react to the game itself,” he said. “It is a tough, tough game since it is so mental.

“After all, the ball just sits there and waits for you to hit it. Sounds easy, but it isn’t. Each athlete must figure out how to handle the failures, and successes, in hitting that waiting ball perfectly.

“It is a great learning experience for them as they learn to handle the ups and downs of golf. How each golfer reacts to the good shots and bad shots says a lot about their character to others and themselves.”