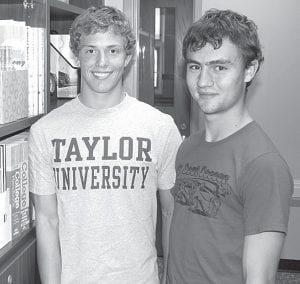 Pettisville High School seniors Alex Roth, left, and Matthew Storrer were named commended students by the National Merit Scholarship Corporation, based on the results of the PSAT/NMSQT test.– photo by David Pugh

The two earned the honor by scoring in the top 5% of those who took the Preliminary SAT/National Merit Scholarship Qualifying Test, commonly known as the PSAT/NMSQT test.

“I can’t always keep track of all the tests we take,” Storrer said.

Information provided by Michael Lane, PHS principal, stated that only about 34,000 students from across the United State are named commended students. They are recognized by the National Merit Scholarship Program for exceptional academic promise.

They won’t continue in competition for national merit scholarships.

“What I saw on the Internet says we don’t necessarily qualify for any immediate money. For some companies and programs it’s a requirement, and we can apply for other scholarships,” Roth said.

Storrer said he didn’t remember the test “being diffi cult.”

They took the test as sophomores, and had an option to take it a second time as juniors.

They learned they were commended students when Mr. Lane gave them their notices in the school cafeteria.

“We really didn’t think about it, but Mr. Lane came in and kind of made a big announcement,” Roth said.

“Pretty much the whole high school was in there eating when he announced it,” Storrer said.

Roth said Lane “started talking about standardized testing or something, and I kept eating, and all the sudden he mentioned my name.”

“I kind of zoned out until I heard my name,” Storrer said.

The first day, their fellow students remarked on their honors.

Roth said he took his letter home to his parents, Loren and Nancy Roth.

“My Dad saw the National Merit Scholar thing, and he said, ‘Oh, wow, this could be a big deal.’”

Storrer admitted he took the letter home to his parents, Steven and Laurie, and then laid it down and forgot to give it to them for a while.

Roth said a couple of teachers had congratulated them on their honors.

Since being named commended students, the two said they haven’t had their assignments graded more strictly or loosely.

“They (teachers) know what we can do; they know what to expect,” Roth said.

Storrer said their teachers were familiar with their work and he and Roth had not had a sudden increase in their grades.

For themselves, Storrer said receiving the honor “is good, yeah, but I haven’t really thought about it. I’m preoccupied by day-to-day stuff.”