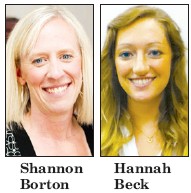 One is a Pettisville native and a PHS graduate. The other is from Minnesota and has been working in the Pettisville school district.

The daughter of Randy and Joy, Pettisville, she graduated from PHS in 2008.

She earned a bachelor’s degree in special education with a concentration in elementary education from Spring Arbor (Mich.) University in May 2012.

“I have always wanted to settle around the area where I grew up, and feel very blessed with the opportunity to teach my first year out of college,” she said.

She is engaged to Dan Dymarkowski.

She said she is grateful for support not only from family and friends, “but the other teachers and the community as well.”

She grew up in the city of Marine on St. Croix, Minnesota, which currently has a population of about 700.

She graduated from Stillwater (Minn.) High School in 1993.

She attended Taylor University, versity, Columbus. She received her degree in December 2011.

“This year, I will be teaching second grade at Pettisville, and it was well worth the wait,” she said.

“The people I get to work with and the students that attend Pettisville make it a great place to be every day.”

She is married to Chad Borton, who grew up in Wauseon and attended Delta High School. They have four children: Darby, 14; Aidan, 13; Marais, 11; and Wesley, 10. All attend Pettisville.