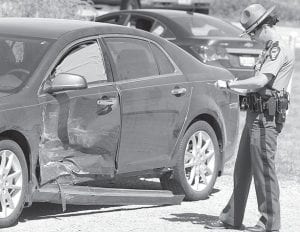 An Ohio State Highway Patrol trooper fills out a report following a two-vehicle collision on St. Rt. 66 that occurred Thursday, Sept. 5, at 1:08 pm. The drivers of the two autos were taken to the Fulton County Health Center, where they were treated and released.– photo by David Pugh

Two persons were treated and released at the Fulton County Health Center following a two-car accident on St. Rt. 66 at 1:08 pm, Thursday, Sept. 5.

The Ohio State Highway Patrol report states a car, driven by Carolyn M. Morehead, 66, Defiance, was traveling north on the highway, and was attempting to make a left turn into the Field of Memories driveway in the 5000 block of St. Rt. 66.

A second car, driven by Cory K. Casey, 30, Archbold, attempted to pass the Morehead auto as she made her turn. The two vehicles collided, coming to rest on the west side of the road.

Archbold Rescue responded to the crash and transported Morehead and Casey to FCHC.