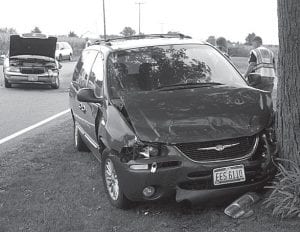 Archbold Rescue transported two persons as a result of the two-car collision at the intersection of Co. Rds. 19 and F, Monday morning, Sept. 20. The Ohio State Highway Patrol report on the crash was not available at press time. Archbold Rescue was called to the crash site about 7:24 am. Danyoli Hernandez, Wauseon, and Sarah Rupp, rural Pettisville, were taken to the Fulton County Health Center, where both were treated and released.– photo by David Pugh

Thieves Break Into OfficeWoman Arrested On WarrantSuspicious Vehicle At Dealership