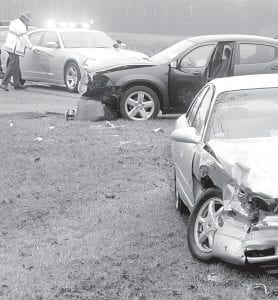 Two persons were taken to the Fulton County Health Center as a result of a two-vehicle crash, which occurred on St. Rt. 2 near Co. Rd. 19 north of Pettisville, Wednesday, April 10. Wauseon and Archbold Rescue squads responded to the crash.– photo by David Pugh

The Ohio State Highway Patrol report states Courtney Beltz, 16, Wauseon, was driving a car west on St. Rt. 2, and attempted to turn left into a private drive west of the Co. Rd. 19 intersection.

Her vehicle collided with an eastbound car driven by Jamie Kretz, 32, Swanton.

The Beltz vehicle went off the south side of the road before coming to rest.

No information on either party was available from FCHC.

An OSHP trooper cited Beltz for failure to yield the right-of-way while turning left.