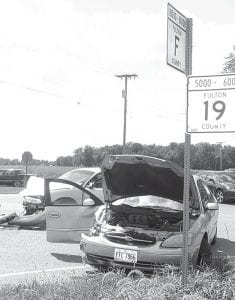 Two cars were involved in a collision at the intersection of Co. Rds. 19 and F, Tuesday afternoon, Aug. 28. Archbold Rescue transported the two female drivers to the Fulton County Health Center, where they were treated and released.– photo by David Pugh

Her car collided with a northbound car driven by Hasenkamp.

ALS-1, the Archbold-based Fulton County paramedic squad, and Archbold Rescue responded to the crash, along with FCSD deputies.

Archbold Rescue transported Merillat and Hasenkamp to the Fulton County Health Center, where they were treated and released.

Merillat was issued a citation for failure to yield while turning left.