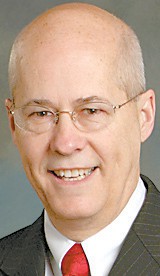 Tom Stuckey, current president, announced his retirement to the college board of trustees at their April 28, 2017 meeting.

At the time, Stuckey said under the terms of his employment, he was required to give an 18-month notification to leave the post.

His target retirement date is June 30, but if a new president is ready prior to that, he is willing to step down earlier.

Bellamy said there were six highly-qualified candidates, both from within NSCC and from outside the college, who received initial interviews during November and December 2017.

“Recently, two candidates were selected for a second round of interviews, which are scheduled to take place in January.

“Additional updates will be provided once a new president is selected and approved by the Board of Trustees.

Stuckey was named acting president of Northwest State on Aug. 16, 2007.

He was then selected to head the college in October 2007.

The board did not conduct a formal search for a new president.

Stuckey replaced Betty Young, who left the college after four years to lead a college in North Carolina.

Employed by Northwest State since 1983, Stuckey served in several roles.

A graduate of Hilltop High School, he received a bachelor’s degree from Goshen (Ind.) College, followed by a master’s degree and a doctorate from Bowling Green State University.

At the time of the announcement of his retirement, Stuckey said, “Basically, my wife and I are ready to stay in Northwest Ohio, take life a little easier, get involved in community things, and lend our support to the quality of life we all enjoy here in Northwest Ohio.”