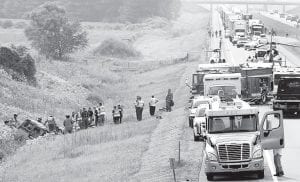 Rescue personnel from Archbold, Wauseon, and Fayette tend to the five victims of a Friday afternoon, Aug. 1 crash on the Ohio Turnpike that occurred when a van, in the ditch at left, went out of control and overturned. Behind the rescue vehicles are two medical helicopters, waiting to fly three victims to Toledo Hospital. Also note the line of stopped semis, waiting for the eastbound lanes to reopen. The eastbound lanes were closed for about 90 minutes.– photo by David Pugh

At least one person, a 17- year-old girl, was in critical condition at Toledo Hospital following one of two crashes Friday afternoon, Aug. 1, on the Ohio Turnpike.

Traffic in the eastbound lane was stopped for about 90 minutes while rescue workers were at the crash scene.

While they were at the crash site, a second mishap, involving a motorcycle, occurred in the westbound lane, which sent a woman to the Fulton County Health Center.

Officials with the Swanton post of the Ohio State Highway Patrol, which polices the toll road, reported that at 3:20 pm, a conversion van, driven by Rosa Barrios, 49, Waukegan, Ill., was traveling east when the vehicle went off the right, or south, side of the road.

The van rolled over and came to rest on its wheels near the bottom of the ditch at about the 31-mile marker.

R. Barrios and one of the passengers, Marbella Barrios, 17, Waukegan, were taken by Fulton County Emergency Medical Service ambulances to FCHC.

Three other passengers in the van– Antonio Barrios, 57, Xiomara Lopez, 17, and Irma Rosiles, 54– all of Waukegan, were taken by helicopter ambulance to Toledo Hospital.

As of midday Monday, Lopez was listed in critical condition. No information was available for A. Barrios and Rosiles.

Some of the passengers in the van were trapped; rescue crews were observed using axes on the wreckage.

There were reports that a tire blew before the crash, but Vern Fisher II, OSHP lieutenant, said evidence did not agree with that report.

“Looking at the tire marks on the roadway, they just didn’t match. A blown tire leaves distinctive marks,” he said.

“What we saw on the roadway were yaw marks” from a vehicle sliding sideways.

Fisher said he arrived at the scene soon after it happened.

While he saw small pieces of rubber on the roadway, he suspected they came from another vehicle, possibly a semi– not the van.

An OSHP accident reconstruction specialist looked over the scene and agreed a blown tire was not at fault.

While crews were at the scene, there was a second mishap in the westbound lanes, about two-tenths of a mile west of the 31-mile marker.

The cycle, which was pulling a small trailer, laid over onto one side and threw Joseph off.

Neither was wearing a helmet.

Two ambulances left the scene of the first crash to respond to the second. Joseph was taken to the Fulton County Health Center, where she was treated and released.

Fisher said at around the same time, there was a noninjury collision near the site of the van crash, and troopers on the eastern end of the turnpike were involved in a vehicle pursuit.

Radio frequencies for OSHP were closed to all but pursuit traffic, complicating efforts to deal with the crashes.

“It all happened at once,” Fisher said.–David Pugh