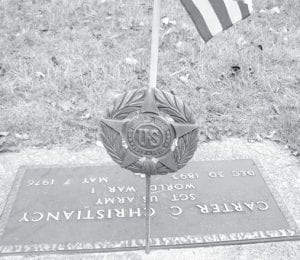 Bronze markers similar to this one, which designates the grave of a World War I soldier, were stolen from two Wauseon-area cemeteries recently. About 100 markers valued at $2,500 were stolen from Wauseon Union cemetery.– photo courtesy Wauseon Police Department

A man and a woman are being held in the Corrections Center of Northwest Ohio in connection with the theft of grave markers, stolen from the Wauseon Union Cemetery.

The bronze markers are designed to hold a small American flag, and designate the graves of war veterans. They are placed by veterans groups.

A cemetery official told Wauseon police officers about 100 of the markers were stolen from the cemetery prior to Thursday, Aug. 2.

Darrell Merillat, Fulton County sheriff, announced Friday, Aug. 17, that Jamie Spiess, 24, and William Delaney, 39, both of rural Swanton, were arrested and charged with possession of stolen property in connection with the Union Cemetery case. 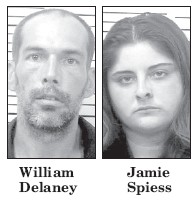 The evidence resulted in the arrests.

Records indicate warrants for the arrest of the pair were issued Friday, Aug. 10.

The two were booked into CCNO, Thursday, Aug. 16.

Both appeared in Western District Court by video Monday, Aug. 20.

As of late Monday night, both were still being held at CCNO.

In a press release, Merillat said the investigation continues, and other charges are possible.