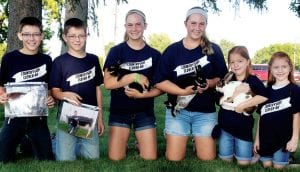 There are three sets of twins in the Countryside Clovers 4-H club. From left: Wyatt and Dakota Armstrong, 12; Kacie and Gracie Wolf, 13, and Katelyn and Kendall Liechty, 7, all of rural Archbold. Wyatt and Dakota will each show a cow at the Fulton County Fair; Kacie and Gracie will show rabbits. While Katelyn Liechty holds a rabbit, the seven-year-olds won’t have animals at the fair.– photo by David Pugh

In the animal barns at the Fulton County Fair, the pens and stalls are divided by various county 4-H clubs.

Anyone touring the Countryside Clovers sections could end up seeing double three times over.

That’s because there are not one, or even two, but three sets of twins in the club this year.

It’s the first time there have been three sets in the club.

Wyatt and Dakota Armstrong, 12, are each taking cows to the fair.

Katelyn and Kendall Liechty, 7, say they’re not old enough to take animals to the fair.

Both girls agreed they will take bunny rabbits in the future.

The Armstrongs say they’re fortunate, because they can keep their cattle at a friend’s barn.

Wyatt said cattle can be stubborn, and that isn’t necessarily a bad thing.

But Dakota disagreed, saying, “The stubborn part is a bad thing because they can’t do what you want them to do.”

Wyatt said he didn’t know if the brothers helped each other with the project. Dakota, however, was clear– it was each man for himself.

The Wolfs said they have always been involved with rabbits. They got their start because their father was in 4-H and took rabbits to the fair.

Wyatt and Dakota said the same thing happens to them, as did Katelyn and Kendall. For twins, it’s an everyday thing.

At school, the older twins said they’re split, each going to a different classroom.

That’s a good thing, Gracie said, because, “I don’t have to talk to her.”

The older twins said they’ve never intentionally switched identities to get out of working on a project.

The Wolf sisters and the Liechty sisters say they trade clothes back and forth, but Gracie said it makes her mad when her sister wears her favorite shirt.

The Liechty girls, however, said it was fun.

When Kacie and Gracie asked why they were involved with showing rabbits, It was Gracie who had a simple, direct answer.