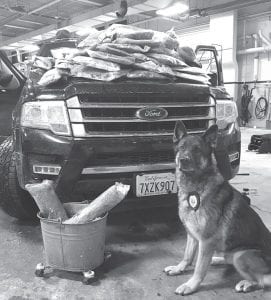 Pharaoh, the Wauseon police canine, with the sport-utility vehicle stopped on Sunday, Dec. 31, 2017, near the Archbold- Fayette exit on the Ohio Turnpike. Piled on the hood and in the bucket are 70 pounds of marijuana found in the SUV. Pharaoh “alerted” to the presence of drugs in the vehicle, which resulted in the search and the arrest of a California man.– courtesy photo

The Ohio State Highway Patrol, with the assistance of Wauseon police, arrested a man accused of transporting 70 pounds of marijuana worth $318,000 on the Ohio Turnpike.

In a press release,OSHP officials say they stopped a rented 2017- model sport-utility vehicle with California license plates for a speeding violation on the turnpike about three miles west of the Archbold- Fayette exit about 12:44 am, Sunday, Dec. 31, 2017.

Information filed with Western District Court indicates the vehicle was going 89 miles per hour in a 70 mph zone.

After the vehicle was stopped, troopers observed criminal indicators.

The Wauseon drug-sniffing police dog, Pharaoh, was called to the scene.

After doing a sweep of the vehicle, Pharaoh exhibited behaviors indicating he had detected drugs in the SUV.

A search of the vehicle revealed the marijuana wrapped in plastic bags.

The driver, Joseph Evans, 25, Chula Vista, Calif., was arrested on charges of aggravated possession of drugs and aggravated trafficking in drugs, in addition to the speeding citation. 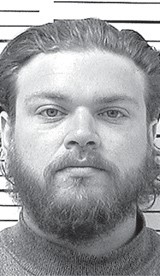 He was transported to the Corrections Center of Northwest Ohio.