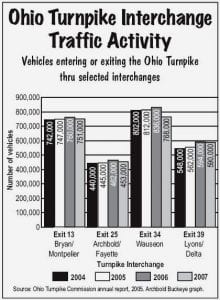 In 2006, figures show total vehicle-miles traveled by all vehicles was just over 3 billion.

The figure dropped to 2.98 billion in 2007. Roughly, the total vehicle miles traveled on the toll road was down about 61 million, or about 2%.

The downturn is also reflected in the number of vehicles flowing through area turnpike interchanges.

The Delta-Lyons interchange, Exit 39, was only off about 4,000 vehicles, about seven-tenths (.7) of one percent.

“Traffic on the turnpike is like traffic everywhere. It’s down, due to the economy and gas prices,” she said.

She said revenue from tolls, which fund much of the turnpike operation, also is down. Turnpike commission officials have made budget adjustments to compensate for the lower revenue figures, she said.